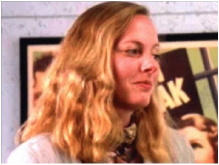 She got her BFA from Syracuse University in painting and printmaking and her MFA from California Institute of the Arts where she studied film. As a set decorator, her “day job” for many years, she worked with David Mamet, Michael Apted, and happily with Robert Altman on The Player, (in which she is a featured actress) Short Cuts, Kansas City, and Cookie's Fortune.

She has written and directed several plays including the critically acclaimed and award winning "Brush Strokes," inspired by paintings of Edward Hopper. Her play "Dominoes" is available through the Dramatists Play Service and “Defrosting Popsicles” is published via Playscripts Inc. Susan has written screenplays on spec and for hire; most notably— co-writer of the Academy Award winning film Pollock for actor/director Ed Harris. 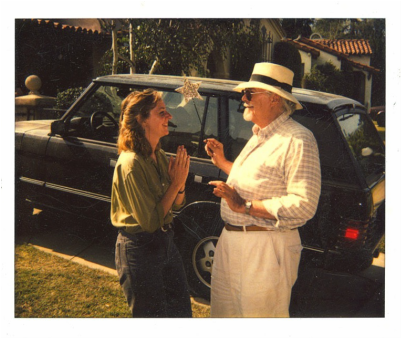 Set decorating "The Player" I found a magic wand on the set. Here's my fairy-godfather Bob Altman blessing me with it.
Susan’s feature film, In the Land of Milk and Money, a wild social satire, garnered awards and rave reviews at festivals in the US and internationally.  She has written and directed short films, commercials, and music videos.

She has taught screenwriting and playwriting at The MET Theatre in Hollywood, ART CENTER in Carrboro, NC and OLLI (Osher Lifelong Learning Institute) at Duke University, as well as giving workshops at film festivals, community centers, the North Carolina Writer's Network, etc.  She joined the faculty at North Carolina State University in January 2017 teaching Screenwriting.